A welcome look behind the scenes at the first Mayor’s Question Time of 2018.

As part of our role as Assembly Members we hold the Mayor and representatives of other bodies to account. One of the ways we achieve this is at Mayor’s Question Time (MQT).

At the 18 January 2018 MQT, we discussed topics ranging from knife crime, hate crime, and clean air. My questions to the Mayor were on ‘community involvement’ as described in the Mayor’s new draft London Plan.

Here is a behind the scenes look at this first MQT of 2018.

At Mayor’s Question Time on 14th September, I raised the issue of off site manufacturing with the Mayor, who said he was very keen to encourage offsite manufacturing in London and sees London as a future leader in the sector.

My report on offsite manufacturing potential to contribute to solving London’s housing crisis can be found here: https://www.london.gov.uk/sites/default/files/london_assembly_osm_report_0817.pdf 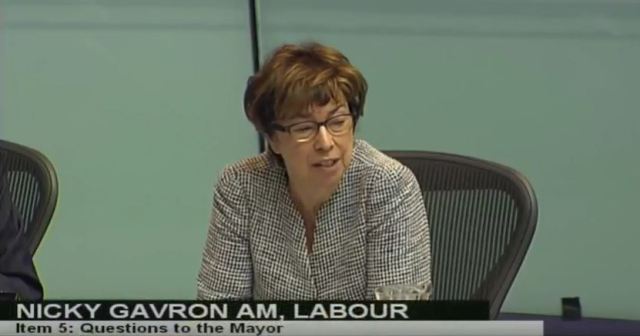 At the London Assembly’s 13th July Mayor’s Question Time I urged the Mayor of London to ask the Government to revisit their rule change that could see London lose vast swathes of light industrial workspace.

On 30th September 2017 the Government is introducing an extension to permitted development rights to include light industry. We have already seen the damage permitted development rights have had on office to residential conversions. This extension will threaten the existence of up to 36 per cent of these light industrial premises scattered all over London, which could see them turned into substandard homes.

The Mayor of London said: ‘Just like we need more homes in London, we need more workplaces too. So, let me think about what we’ve said and think about renewing my efforts to try and persuade the government to change their mind’.

Nicky said: ‘I am pleased the Mayor is reviewing the Government’s decision to extend permitted development rights to light industry. This is such an important issue to Londoners and I will continue to monitor this closely’.

The London Assembly unanimously agrees a motion on the London attacks at an extraordinary meeting earlier today.

The London Assembly today condemned the attack in London Bridge and Borough during an emergency meeting at City Hall.

A motion, agreed unanimously, said that London grows stronger in its resolve to stay united and that the capital will continue to enjoy its freedom and treasure its diversity.

During the meeting, Assembly Members offered their condolences to those affected by the attack and expressed their gratitude to the emergency services.

Jennette Arnold OBE AM, Chair of the London Assembly, who proposed the motion, said:

“At this time we are thinking about the victims and their loved ones as they attempt to come to terms with this harrowing attack.

Once again we have witnessed the incredible bravery and skill of our emergency services. They have truly done us proud and we are grateful for everything they do to keep us safe.

Our city is shaken but we are not defeated. This attack was meant to divide us, it will only bring us closer. It was meant to weaken us, it will only make us grow together in strength. The aim of terrorists is always to destroy our values and our freedom, but how pathetically naïve they are because that will never, ever, be allowed to happen.”

Tony Arbour AM, Deputy Chairman of the London Assembly, who seconded the motion said:

“London will never bow to threats and extremism. Londoners have always resisted and triumphed over adversity and they will continue to do so.

The London Assembly applauds the resilience of the capital and is proud to be part of this great democratic city.”

The full text of the Motion is:

“This Assembly ‎utterly condemns the cowardly and senseless attacks on innocent Londoners and visitors that took place in the London Bridge and Borough Market areas on the evening of 3 June.

Our thoughts, prayers and condolences go out to those who were killed or injured, and to all those affected. We are with you. The stories of bravery and care for one another arising from the shocking events are testimony to the best of humanity, in amongst an example of the worst.

Our heartfelt thanks and admiration goes out to the ‎emergency services, with the swift and decisive actions of the police officers on the scene, putting their own lives at risk, preventing what surely would have been an even more horrific outcome. They are true heroes.

Finally, we say to all that our Capital grows stronger in its resolve to remain united. London will continue to enjoy its freedoms and treasure its diversity long after the terrorists have been beaten.‎

We will remain brave, we will be calm and we will carry on‎.”

I want to encourage you all to respond to this woefully inadequate clean air draft consultation!

After years of inaction and the threat of EU fines under his predecessor, Boris Johnson, I was delighted to see Sadiq take the swift action he promised in his manifesto on an issue that affects us all – London’s air quality.

The Mayor launched a consultation at Great Ormond Street Hospital on Tuesday as the evidence mounts that not only does poor air quality shorten adult lives – With the equivalent of 9,416 Londoners dying from long-term exposure to air pollution every year – its impact on children’s health both now and in their futures as adults is also increasingly clear, with poor air quality lowering children’s lung capacity for life.

Latest research, buried by Boris Johnson and revealed by Sadiq Khan soon after he took over the Mayoralty revealed over 443 schools in the capital are in areas exceeding safe legal pollution levels.

From new charges for the oldest most polluting vehicles, to improved alerts for high-pollution episodes, the Mayor is  asking Londoners for their views on his Clean Air Action plan.

The public have until Friday 29th July 2016 to feed back on the first round of the consultation, further more detailed consultation will take place later this year and some measures could be implemented as early as 2017.

The Emissions Surcharge in 2017, followed by an expanded ULEZ in 2020, would be the toughest crackdown on the most polluting vehicles by any major city around the world.

The first consultation will run from 5th July to 29th July 2016. Londoners are being encouraged to take part by completing a survey and participating in online discussions around each of the aforementioned issues.

You can participate in the consultation here

Brexit: Statement from the Mayor of London

Full statement of the Mayor of London Sadiq Khan’s statement on the result of the EU Referendum below:

“I believe that Britain is better off within the European Union, but the British people have clearly spoken today, and their democratic will must now be fulfilled.

“I would like to praise David Cameron for the dignified way he has reacted to the message sent by the British people in his words at Downing Street today. I agree with the Prime Minister that Britain can survive and prosper outside the European Union.

“I want to send a clear message to the British people and to businesses and investors around the world this morning – there is no need to panic.

“Although we will be outside the EU, it is crucial that we remain part of the single market. Leaving the single market of 500 million people – with its free-trade benefits – would be a mistake. I will be pushing the Government to ensure this is the cornerstone of the negotiations with the EU. It is crucial that London has a voice at the table during those renegotiations, alongside Scotland and Northern Ireland.

“We all have a responsibility to now seek to heal the divisions that have emerged throughout this campaign – and to focus on that which unites us, rather than that which divides us.”

“I want to send a particular message to the almost one million Europeans living in London, who make a huge contribution to our city – working hard, paying taxes and contributing to our civic and cultural life. You are welcome here. We value the enormous contribution you make to our city and that will not change as a result of this referendum.”

Posted in Uncategorized | Leave a comment
Nicky Gavron AM
Create a free website or blog at WordPress.com.